Hello readers.  I hope your week has been moving along splendidly.  This week has been flying by for me.  I had all sorts of good intentions this week of getting back to the gym but.....my RA had other ideas about that.  So, I have been making a concerted effort to move as much as possible at home.  There even might have been a bit of dancing while doing a bit of housekeeping and laundry.  I figure, any extra movement is better than none at all.

Monday was my worse day.  I sat for most of the day. Between the fatigue, joint discomfort and other RA symptoms, I felt like a sloth moving through life.  I journaled about it.  Just putting my thoughts and feelings on paper really helped.  By Tuesday, I was back to my happy go lucky self.

I have had the honor, this week, of getting to pick up my Grand from school and spending time with her each day.  Monday she had just a tish of homework and then we got to sit and chat a bit about school and her friends.  We also discussed the teacher walk out that is scheduled to happen this week.  Her school will not be affected since it is a private school and her teachers are paid by the tuition fees.  Unfortunately, some of her extra curriculum activities will be affected since they take place in pubic schools.  Trying to explain politics to a 12 year old is quite interesting.  She is very smart and quite aware of what is going on in the world.  She also has her own opinions on things and they are not influenced by her parents or anyone else.  She makes up her own mind according to her sense of right and wrong from her religious upbringing.  Love that child.

There is a bit of excitement going on right now with her though.  Her basketball team is in the finals.  They lost their game last night and have another one tonight.  If they loose again, they will be out of the tournament.  If they win, they play again on Thursday for a spot on Monday's final game. 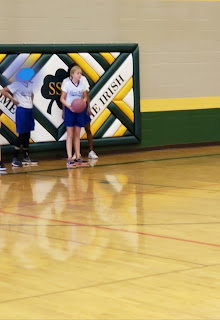 I took some photos during their warm up.  Her team mates faces have been blocked out since I do not know how their parents feel about them being on social media. 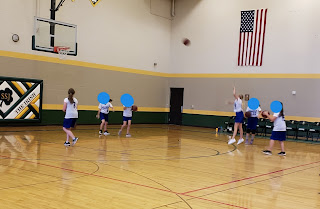 She has really loved playing basketball.  She has told me that volleyball is her favorite though.  I can see why.  She is so lanky right now.  She is at that stage where she is all arms and legs and they get in her way at times.  She will outgrow it in a year or two.....maybe.

She is also taking cheer.  Her cheer team took first place last weekend and is now heading to state in the next 3 weeks.  We will be attending that performance. 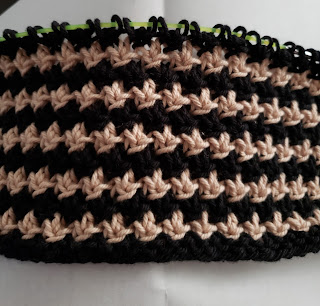 Hubby comes home today.  I have green chili in the crockpot for dinner.  Since I have no clue when I will be home from the basketball tournament, I wanted to be sure he had food here for when he got hungry.  He just called and is on his way to see his mom on his way out of town and then will be on the road for his journey home.

As soon as I publish this blog post, I am going to go and make a couple of loaves of banana bread.  Today, I will be adding dried cranberries and pepita seeds to it.  I like to add fruit to my banana bread and hubby likes nuts of some sort in it.  So we will have the best of both worlds.  I might give one of the loaves to our friend who lost his wife last year.  I know those men do not do much home cooking and banana bread is one of their favorites.