I am really loving this 2nd year of projects.  I seem to be much more organized this year and more focused on my list for the year.

This week did not see a whole lot of progress but I did do something on my list that has been sitting in project bag for the past 2 years. 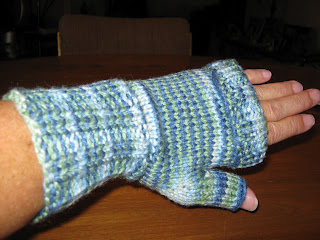 This is a combination of patterns that I put together for my first ever fingerless mitt.  It was done on double point needles and this is the first time I have done a complete project on double points and I actually think I really am enjoying working with them.  I have started on the second mitt and should be finished this week yet.  That will take one item off my list for the year.

I did add to my stash this week. 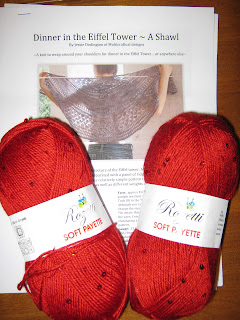 Is this not the most wonderful yarn?  It is so soft and the sequins in it makes it totally ME!  I saw this on Jimmy Beans Wool Watcher and the prices was awesome.  I thought about it and then told myself that I could not buy it unless I had a pattern in with to make it.  So I quickly went onto Ravelry and started looking for shawl patterns for this weight of yarn.  I found "Dinner in the Eiffel Tower" and fell in love with all the lace and could just see this made into it.  So.........Now I am dying to put this on the needles but am waiting until I get a bit more of my YoP list completed before I start on something that is NOT on the list and I refuse to add to the list.

So here is a look at the list again:


I ordered DPN's this week in sock sizes 0-3.  I think I am going to try my hand at doing socks on DPN's and see how I like it.  I got them from Knit Picks and I got the 5" needles as the 7" ones I am using now keep poking me in the tummy.  (stop laughing!)


This coming weekend we have a conference to go to.  It is Friday evening through Sunday evening.  This is one place I can take my crafts with me and work on them without being disturbed and no one cares.  So I will probably be taking my cancer ribbon shawl with me as I should be able to complete that while there.  If that gets completed then I will take dishcloths to work on since they are small and easy to carry.  At least that is the plan right now.


PS:  I want to thank all of you that have been leaving comments for me.  I do read all of them and as some of you know I will reply via email if there are questions that need to be answered.

Here we are again on a lovely Sunday morning.  I love this time of day.  Hubby is still sleeping, dogs are all fed and sleeping and I have some quiet time to myself to get my blog up to day and plan my day out.

I made progress this week and have some pictures to prove it.  So let's get started. 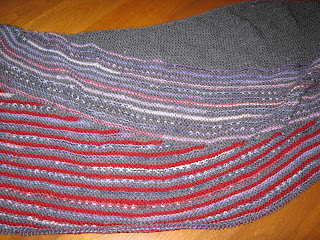 I am now ready to do the last step in the Color Affection Shawl.  I am excited to finish it (hopefully this week) and get it off the needles so I can concentrate on something else for a while.  This is not the worlds greatest photo because it is all scrunched up on a 60" circular.  Once it is done I will have someone hold it up and out so you can get a true idea of the fun of it. 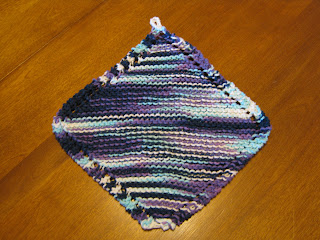 Another dishcloth finished.  Once again done in Granny's Favorite Dishcloth pattern.  It is simple and mindless to do.  Although I do believe my favorite pattern is still the double hump and will go back to that on the next ones that I do. 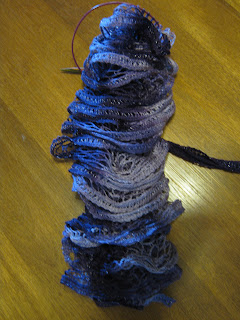 Walking through Walmart I found an entire rack of this fiber for under $5!  I grabbed one so I could practice making the ruffled scarves with it.  I have a much more expensive skein that will be done once I get the hang of this.  I am thinking of taking this one out and trying to crochet instead of knitting it.  I am not real fond of the way this is turning out at this point. 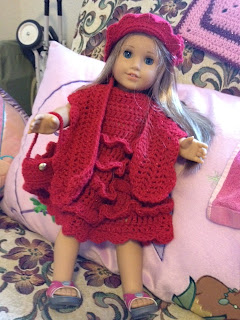 I did manage to get a picture of the American Girl doll dressed in her red outfit.  I am suppose to tell you that this is McKenna and she is the doll of the year for 2012.  My Grand Daughter is so excited to have this one.  She received it from her Auntie/Godmother for her birthday.  Anyway I do know that the hat is a bit too small and the dress is a bit too big but she will not let me frog any of it to make it fit better. 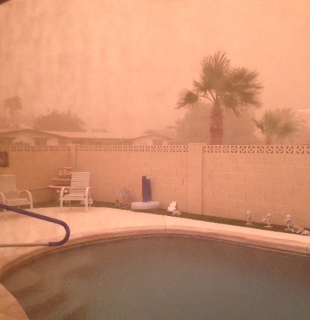 I don't know how many of you have ever seen a dust storm also known to us as a haboob.  We get them quite often here in the desert and it is kind of neat to watch.  This was taken around 4 in the afternoon.  The sky gets dark, the wind starts blowing and then the dust comes in and covers EVERYTHING.  It can last anywhere from 2-3 minutes to almost half an hour.  This one lasted for about half an hour and then the rain came afterwards to make sure there was mud on everything.  The wind reached about 60 miles an hour with this one and the temperature dropped about 15 degrees once the rain hit. 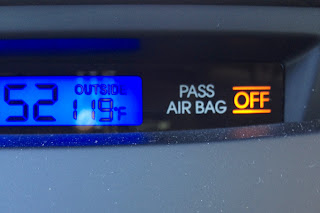 Speaking of temperatures............................See this little wonderful number?  The time on the clock was 4:52 in the afternoon.  I took this picture and as soon as I snapped it the temperature went up to 121F.  So when I hear all of my blogging friends complaining about the heat I just shake my head.  To top this off, I had been sitting outside on the cement for an hour watching my grand daughter take her first swim meet lesson.  I finished my bottle of water in about 20 minutes and my clothes were plastered to my body from sweat (yes I SWEAT!) and my hair was totally drenched also.  So the next time you think it is hot, think about those of us that live in the desert and deal with this kind of heat yearly.  Not even our swimming pool can cool us off as the temp of the water is 97F!  Whenever I think about complaining about the summer temperatures I stop my self and thank God that I have a home with A/C and a comfortable bed to sleep in and then thank him for our men and women in the armed forces that are in much hotter and less comfortable conditions overseas.

This post is picture laden and will include both my craft progress and my family time over the past week.  So sit back and relax.  I will do my craft progress in the first part so those of you who are only interested in that can skim through the rest of the blog to make your comments.  So let's get started. 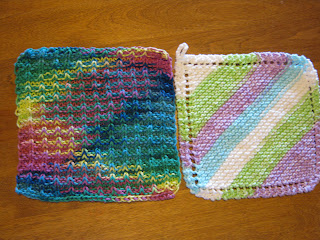 Got another couple of dishcloths done.  The striped one on the right has already found a home with my mom.  She really liked the fact there is a loop on it to hang it up.  It is "grandma's favorite dishcloth" pattern.  The one on the left is another "double hump" dishcloth and is awaiting gift giving at Christmas time.

As for the doll clothes..........................I am once again a bad blogger.  I finished the red dress and made a hat, purse and shawl to match and failed to take a picture of the finished product.  I am hoping that the little girl will bring her American Girl doll over with her all dressed up in that outfit today.  If she does I will get a photo of it and post it next week.  So I managed to complete 2 tops, two skirts and the red outfit all in about 3 days.  Of course I was up until 11:30 the night before her birthday completing it and wrapped it all up and then remembered the camera.  Bad, bad blogger.

I worked a bit on the color affection shawl but not enough for you to notice in a picture.  I have about 8 more rows do to and then I will be in the final phase of it.  I will be happy to get it off the needles and more on to one of the other shawls that are patiently waiting to be finished too.  Not to mention the other projects on my YoP that need to be worked on pretty soon.

Ok, on to the family stuff. 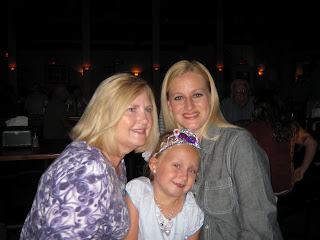 We had a birthday this past week.  The pretty girl in the middle turned 7!  That is her with her Mommy and Grammie.  A pretty nice 3 generation picture if you ask me. 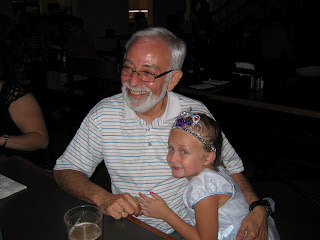 This is her and my hubby who is called Pop Pop.  They have quite a relationship.  He has cared for her since she was born.  In fact he retired early from work just to be her 'playmate'.  He has loved every minute of it. 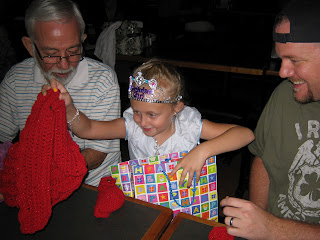 There were present to be opened.  This is the red outfit that I made for her American Girl doll.  I really want a picture if it on the doll! 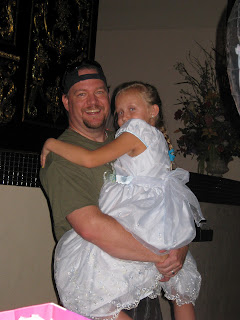 We go to the same place every year for her family birthday party.  It is called Organ Stop.  There is a HUGE Wurlitzer organ there and they place all sorts of music.  So every year she dances with her daddy to some of the slow songs.  I think they both love this little daddy daughter time. 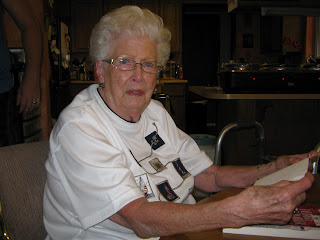 This is my mom.  We decided that last weekend we would have Christmas in July for her. 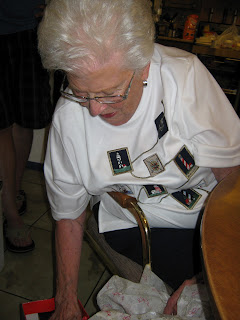 She had no idea what we had planned.  So she was pretty confused when we brought in a Christmas gift bag and a gave her a Christmas card. 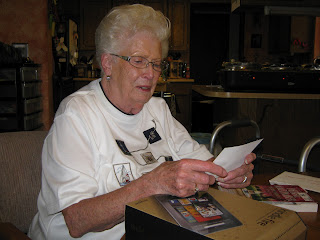 She was absolutely thrilled though, when she saw the Kindle Fire inside.  She has been wanting one for some time now but they are so expensive.  We were going to get her one for Christmas this year as a family gift but my husband changed that. 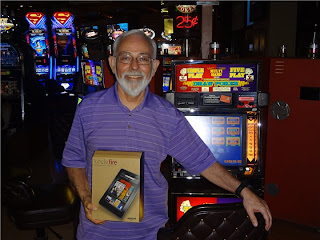 This is my hubby.  He was recently in Las Vegas.  I had to clear that up before you thought we had slot machine in our home!  He was sitting quietly at Barley's watching a baseball game on TV when he heard that there was going to be a drawing for all those playing slots.  So he put some money in the slot machine and started playing when he looked up he saw that he was a winner of a brand new Kindle Fire.  He was amazed.  So he called me to tell that he had just gotten Mom's Christmas present!

That is all the news for now from here.