The past couple of days have been so busy.  I don't know where the time went.  Well, yes I do but can not believe I hardly have anything to show for all I feel I did.

Wednesday evening, hubby and I finally got to go out for our anniversary dinner.  That was at 8 pm and the place we went closed at 9.  We just ordered appetizers since it was so late. When we got home, we watched a little TV and that was all of our big celebration.  We are such an exciting couple.

Thursday came early for us.  We had a Mass said for my father in law, who passed away 10 years ago.  Mass was at 8 am!  It takes me almost 2 hours for my joints to function in the mornings.  The 5:30 wake up was not a welcomed thing but oh well.........I managed.  Prayer Shawl ministry was at 9:30 but I was available to help set up since I was already on the church grounds.  We received 23 shawls from another church and we had to go through them to sew our tags and medals on them.  There were some that were way too small again too.  Guess who has 2 more shawls to enlarge...........yup.........I need to learn to say no.  Unfortunately, some of the other members just wanted to toss them away.  I was appalled.  they are perfectly fine items that just need a bit more TLC.

When I got home, I noticed hubby was sounding funny.  Great...........he was getting sick.  He said it was allergies.  FINE!  I went to visit my mom ( that's another long story) Let's just say she has deteriorated mentally in the past 2 weeks.  I was shocked at what I saw and was validated when I spoke to the nurse about it.  I will be calling her Dr on Monday to see where we go from here.  When I got home.........hubby sounded horrible.  I called and got him a Dr appointment for this morning.  I was not going to go through the weekend with him being miserable.

Thursday evening, I went to adoration and left the sick man at home.  He slept in his recliner so he could breath.  I know he did not sleep well,  Its hard to get comfy when you have a hard time breathing.

We made it to the Dr appointment and he was diagnosed with a Man Cold. (Very different from a woman's cold)  She still gave him antibiotics for prophylactic reasons as she could tell it was going to get much worse.  Sure enough, by noon, it had moved to his chest.  He is blowing, sneezing, coughing and right now we are dealing with a bloody nose that doesn't want to coagulate and he is refusing to go to the urgent care.  MEN!!!!!!!

I have dinner cooking.  We were supposed to have our friend over tonight for dinner , needless to say we cancelled that since he has heart issues.  I am still going to take dinner over to him though.  I have pork chops in the oven, rice in the rice cooker and mini apple cheesecakes in the fridge. 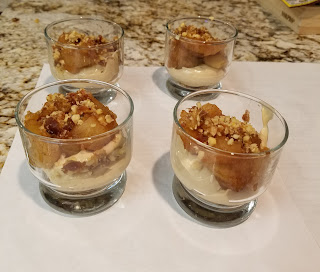 Nothing says fall like something with apples.  This was a super easy dessert to make.  I made a double batch so hubby and I could have them for a few days. Everything should be ready in about 30 minutes.

If the bleeding has not stopped after food is done, we are going to urgent care.  And, NO, he is not on blood thinners or aspirin.  He just bleeds easily.  His blood work is all perfect so we do not know why.  I was really hoping for a glass or two of wine tonight.  Oh Well.

I am working on prayer shawls this week and hoping to get all of them done his week.  I have 2 to enlarge and 2 of my own to complete.  Fingers crossed that things quiet down for the rest of the weekend.  I have so many things on my to do list and it is backed up.

Food is about done.