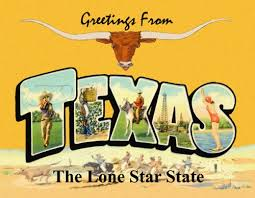 Howdy from Texas.  Yesterday saw me leaving Arizona, boarding an airplane and flying to Texas.  I will be here for the next 2 weeks, helping out around the house while my Daughter in Law recovers from Cervical Spine surgery.
After I arrived yesterday, I got the privilege of taking my Grand Teen to shop for school uniforms.  How fun it is to drive to a place you have no idea where it is, using a navigational system that does not speak to you and getting lost.  It only took an hour to travel the 10 miles to the uniform shop.  Once that was done, it was another adventure getting back to their house.  We did find a Burger King on the way home and got some food since neither of us had eaten all day. 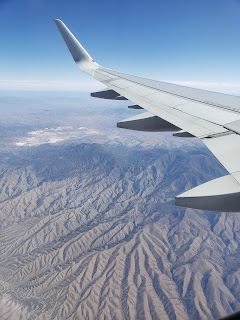 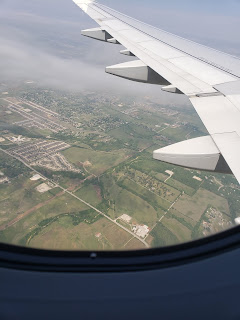 Here is what Texas looks like from the air.  Mostly flat but very green.  Amazing how different the 2 states are.
The flight was very smooth and I had a very nice person sitting in the same row as me.  I had purchased two seats so we did have the middle seat vacant which was really nice.  Otherwise, the plan was packed full.  No beverages are being served on the flight so people had to leave their masks on.  By the time I got outside in Texas, I was so done with the mask.  It had been on my face for almost 6 hours without a break.  It was pretty wet, just from me breathing.  At least, that tells me it is pretty dense so that is a good thing.
Daughter in Law spent last night in the hospital and we are hoping she will be coming home today.  Her surgery went quite well and now we just start the road to recovery.
Last night I had a buddy come in for a sleep over. 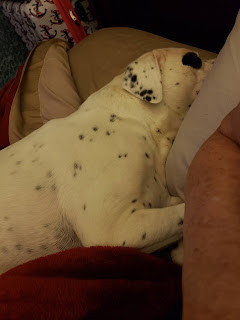 This is Bandit.  He thought I might be missing my dogs so he stayed with me all night.  He is about 10 times bigger than the dog that sleeps with me at home.  But, at least, he doesn't snore LOL.  My little dog snores like a grumpy old man.
Today, I will be working around the house trying to get stuff picked up and put away.  I was told not to worry about cleaning the house as they are still in the middle of bathroom remodeling and the dust is flying all over.  That leaves laundry and cooking for me to attend to while here as well as making sure DIL has everything she needs.  Oh, and I also am responsible for getting the Grand to appointments.
OK, that is all for now.  I think I have time to pick up my knitting and work on that a bit before anything else needs to be done.
Until next time..........................................................
Posted by Leftycrafter at 7:33 AM

Leftycrafter
I am a Lefty crafter living in a Righty world. But this has not stopped me from learning to knit (although I do that right handed), crochet, bead and sew. I love working with all crafts related to yarns. After 40+ years of marriage, my hubby and I now enjoy an empty nest with our 2 dogs. We have 4 children and 7 grandchildren. They keep us young and active. We live in the sunny state of Arizona and love it.