My needles and hook has been very busy this week.  I don't think there was a day where I did not work on something.  That is gratifying and makes me so happy.  I do have pictures to show progress plus a finished object that was not on my YoP list.  But I had to do it. 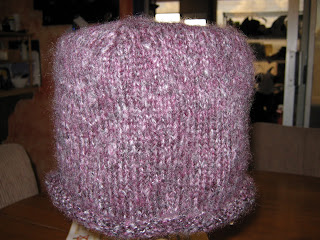 Here is what was not on my YoP.  It is the Turn the Square hat pattern by Jared Flood.  This is my favorite go to hat pattern if I need one in a small time frame.  I did the bottom of this differently than the pattern called for.  I did not do the ribbing on it because this is going to a lady and I liked the rolled edge look on females. 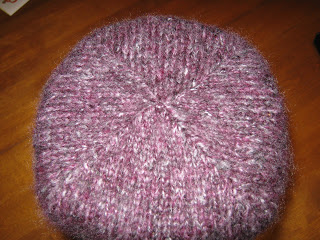 Here is a picture of the top of the hat.  I did not plan on making this for part of my YoP but ended up having to because............................There is a scarf already done with this yarn and being given to a special person next month.  My Daughter in Law told me she could not work with this yarn and wanted to know if I would do something with it.  Since I gave her the yarn I knew what she meant.  It is called Plush yarn and I think it is a Red Heart.  It is very hard to crochet with but knitting with it is much easier.  So I went to work making the hat to go with the scarf. 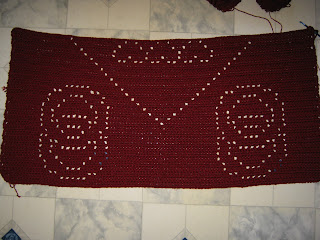 Ahhhhhh, The wedding ring afghan.  I really love this pattern.  It is quick and fun.  It has just enough pattern to it to keep your interest but not so much that you have to watch the graft continually.  I am half way done with it.  Many of you think this is for a wedding but it is not.  It is for an anniversary gift (if completed in time) or Christmas present. 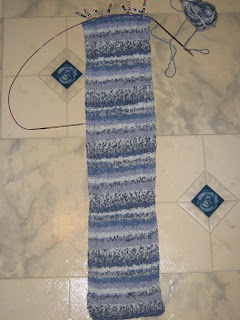 Lastly here is THE SCARF.  It is over 2 feet long now and I still have a little less than 3 feet to do on it.  I have a feeling it is not going to be done by the time my Son and his family leave for Texas.  But I will keep working on it as much as possible.

We are going to the baseball game again today so I think the scarf will be traveling with me.  We are taking the "train" and it takes about an hour on that so there will be some time to work during the trip down and back.  Plus I am sure I will have time during the game to put on a few rows too.