Another week has flown by.  It has been a fairly busy week for this household and I will get into that later in the post.  First, let's take a look at the craftiness that has happened this week. 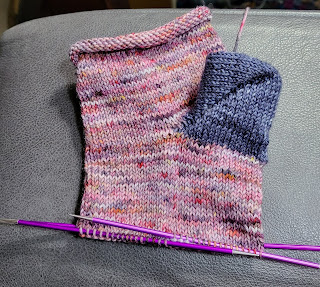 The sock is moving along nicely.  I only work on this in the evenings while watching TV.  It is a totally mindless knit until I reach the toe.
Then there is this: 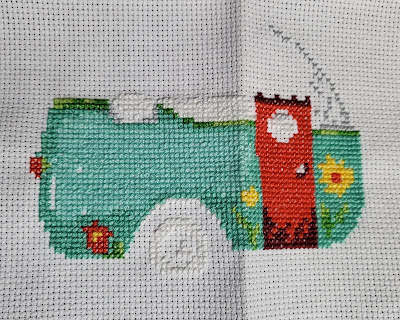 The cross stitch I started last year is back.  I have been dreading the part I am doing now.  Cross stitching white floss on white fabric is not fun.  It requires very close attention.  I have already made one mistake but refuse to correct it.  Since I know where it is I will just work around it and no one else will be the wiser.
If you read my post from last week, you will remember I was making 4 loaves of bread for our 4th of July get together.  There were to be 35 people at the party and I think only about 20 showed up.  Only 1 loaf of bread was eaten and I was able to give away the other 3 loaves with no problem.
So this week, when making my bread, I tried something different.  As I have told you in the past, my bread is made using beer.  The recipe I use said it is fun to try different beers in the bread to help change up the flavor a bit.  I decided to try that this week.  I went to Total Wine and perused their single can craft beer section. 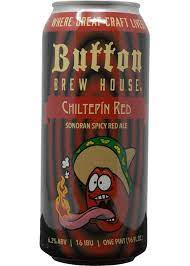 This is what I used in my bread this week.  I was hoping the red chili flavor would come through but it is very subtle. 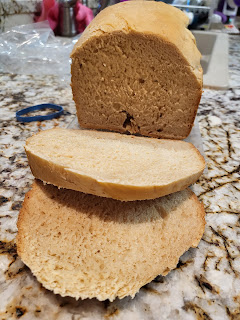 It did make my bread have a bit of a red coloring though.  Mainly because the beer itself is brewed like an Irish red beer would be.  Hubby and I both agree it has a lovely flavor and texture.  I bought two other craft beers to try in my next 2 loaves.  I will let you know how those turn out after they are used.
In other news.......................Our Luna girl gave me a pretty good scare last week.  She was refusing to eat and became very lethargic.  I was quite concerned that we had come to the end of the road with her.  Monday evening I decided to add a little shredded low fat cheese to her meal to see if I could interest her in eating at all.  GOODNESS!  She scarfed the food down and was begging for more.  The next morning she was up early with me begging to be fed.  I once again gave her a tiny bit of the low fat cheese mixed in her food and she ate it all up.  She has been eating just fine ever since and acting like herself again.  PTL!  I know at 16 we are on borrowed time with her.  Yet, it is still hard for me to think of loosing her.  So, we take each day with her as a gift.
This past week has also been busy inside our house.  Tuesday we had new furniture delivered before we were able to get the old out of the house!  Good thing we have a very large family room.  The old furniture cushions had broken down pretty badly.  I tried to get it restuffed but it was going to cost more to do that then to purchase what we found at our furniture store! 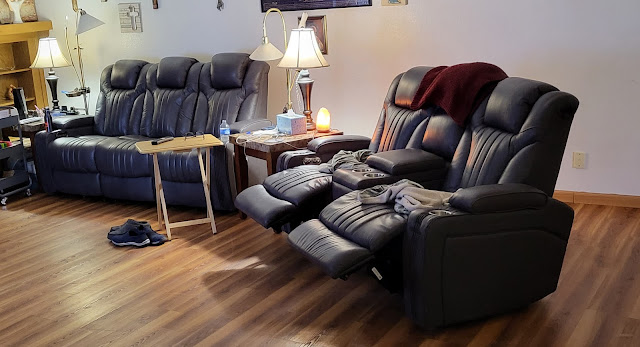 This is the new furniture.  I chose leather this time.  Dog hair on cloth is a huge pain to keep free of said hair.  This is so nice and easy to keep clean.  Just take a damp rag and clean it off.  It is a medium dark gray color.  We really lucked into this set too.  We had seen this on the showroom floor but in brown.  I really had my heart set on gray.  The salesman said he had it in gray but it was in the back of the store........................CLEARANCE!  Seems this color sold out so quickly they only had one sofa left in stock.  We kind of wanted 2 sofas but settled for a sofa and a love seat.  If you are wondering why the foot section is up on the love seat.......it is to help Luna be able to get up there better.  Her jump is not as good as it was a few years ago.  Hubby and I take the sofa and the dogs take the love seat.  (No they are not spoiled)
The old furniture was put on the curb with a 'free' sign on it and was gone by that evening.  I love it when things get repurposed.
Hubby also got a new work bench for his man cave (back room).  It took him 2 days and a couple of phone calls to get the thing put together.  The instructions were less than stellar.  He even asked me to read certain parts of the instructions to see if I understood them.  NOPE!  They were not written for mechanically challenged people.
There was some exciting news this week too.  Our youngest son and his family will be moving to Arizona!  This is the family that lives in Texas.  He and his wife are both retired US Navy.  He is working for a flooring store and saw an opening in our area for his position and applied for it.  He got the job!  He will be coming to live with us the first part of August.  The rest of the family will be joining him the middle of December.  (They have a lease that can not be broken cheaply.)  I am beside myself with joy.  That will give me 3 out of 4 children living close.  I doubt the fourth one will ever move here as he owns his own business and is well established in Washington state.  But that is ok, because I love visiting where he lives.
If you made it to the end, congratulations!  I know this was kind of long but there was so much to talk about.  There is so much more I could put in here but I am sure you have better things to do today. So............................
Until Next Time.......................Happy Crafting!!!!!!!!!!!!!!!!!!!!