It has been a while since I have done a mid week update.  Thought it might help keep my Sunday update a bit shorter if I did one.  Also, we will be out of town this coming Sunday, so my update will probably be a bit shorter anyway.
Today is cleaning day at my house.  We take 2 days each week to clean the house.  When there is 2700 square feet of house, it is easier if broken up so we don't kill ourselves doing it all in one day.  Hubby does the vacuuming and mopping.  I do all the countertops, sinks, cabinet doors and mirrors.  We both do dusting.  It all works out so well for us.  Since hubs is vacuuming, I thought it would be the perfect time to put a few lines here.
Monday was the first half of the house cleaning day.  While the hubs was doing his thing I dived into my craft room to try and get it a bit more organized.  For some reason, it has become the dumping ground when we can not figure out where we want to put items!  The room is much neater now and many items got put in the 'take to charity' pile and other items were gifted to people that has asked for them and then there was this: 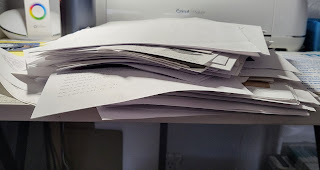 That is a stack of knitting and crocheting patterns I have printed out over the years.  These are the ones that found their way to the recycling bin.  Either they have been made and won't be made again or they will never be made for various reasons.  That took me well over 2 hours to go through.
Monday was also my errand running day.  I usually run errands in the early morning hours but since I needed to give my son a ride home in the late afternoon, I decided to do them then.  UGH!  It was 115F when I did my errands.  That heat totally wiped me out by the time I got home.  My main reason for going out was to make sure our early voting ballots got mailed before we left this weekend.  DONE!
Tuesday was a quieter day.  I made a loaf of banana nut bread and a loaf of bread using 'special beer'.  Here is the beer I used this time.

This one is supposed to have a coffee/chocolate taste to it.  All I know is it made a gorgeous loaf of bread that we used for grilled cheese sandwiches.  YUM!
With our temperatures soaring again this summer, I decided it was time to forget the grand idea of letting my hair continue to be chin length.  Off to the beauty salon I went and had my gal whack it all off. 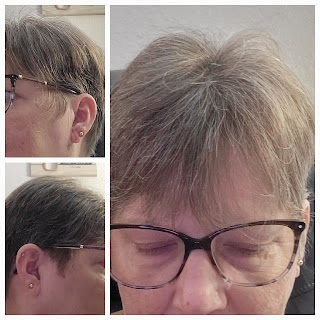 I am talking 4-5 inches of hair was removed from the front of my head and about 3 inches from the back.  Oh my, does it ever feel lighter and not as hot.  It also shows how much gray is really in there.  Yes, I know it will not be 110+ for the rest of the year and it will get chilly eventually.  But that is why I am a knitter and can make adorable hats to keep my head warm!
Hubby and I are leaving Saturday for Albuquerque, New Mexico.  Our dear friend's father passed away and we are going to attend his rosary and funeral mass.  We have another funeral, of a friend, to attend on Friday, before we leave.  I am just about done with funerals!  That makes 3 in less than 30 days.
I am still working on the RCR sock and have high hopes of having sock #1 completed before we leave town and sock #2 cast on.  The cross stitch has also been worked on a bit this week but is in time out so I can get the sock done.
That takes care of all my news for this half of the week.
Until next time.................................................
at July 13, 2022