Yesterday we had to say goodbye to our best friend.  He has been living with us for almost 9 years.  He was great a keeping secrets.  Never did he tell me he didn't like my cooking.  He never complained about his bed being lumpy.  He never had any wild parties.  He was kind to everyone he met and never had a cross word to say to anyone.  Here is a picture of our best friend. 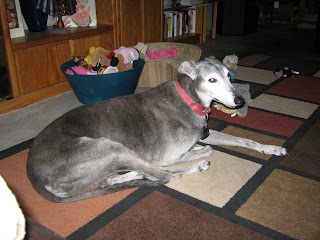 His official name was Live Wire.  But we just called him Wire.  We rescued him when he was just 15 months old.  That is quite young for a pup to come off the track.  But it seems that this gentleman did not have any desire to go chasing a rabbit that he knew he would never catch.  So he would go out of the gate and then tell the rest of the crew that he would meet them back at the club house and turn around and go back to the kennel.  (smart dog)

This was our second greyhound to own and they are the best pet ever.  They are so wonderful with children and other animals.  (well most of them are)  But they are prone to a lot of health issues and we were well aware of this when we adopted him.  And health issues he had.  He had Hypothyroidism, Valley Fever, Pannus, Arthritis and finally ended up with Osteosarcoma (bone cancer).  He had just turned 10.

He was a proud boy.  Never complaining about anything what so ever. 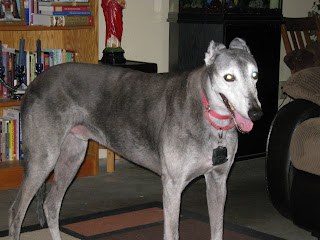 He was smaller than our first grey but still a big guy, weighing in at 80 pounds in his prime.  The last month he had started to loose weight so we knew he was going downhill quickly.  Because he did not stop eating.

Last year we noticed that he was starting to slow down and knowing that greys do not have a longevity of more than 10-12 years we decided to get another dog so it would not be so hard when he left us.  So we got this: 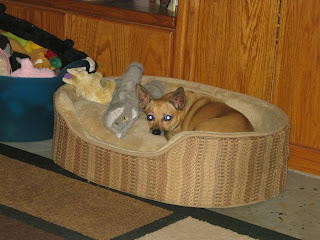 A total opposite of him but a complete complement for his personality.  She did wonders for him.  He perked up and started to play again and act like he did when he was first at our house.  It was wonderful.

But sadly we could not stop the things in life that are meant to be.  So last night we took him into our vet's office and spent the last hour of his life loving on him and giving him more loves that he could have even imagined.  My best friend was there as well as her hubby and their 16 yr old son.  I was very nervous about being there during the final moments of his life............but decided that I could not leave him alone.  After all he had been by my side for the past 9 years through all my ups and downs.  So my hubby and I stroked him and kept talking to him as he passed from this world to the rainbow bridge.  There was a real peace about being there with him for the end.  It was not horrible.  It was not traumatic in any way.  It was not scary.  I know a large part of that is due to the staff of the animal hospital where he has been going for the past 3 years.  They are wonderful.  Even the Vet had a hard time keeping her eyes from tearing up.  He had touched many lives.

So it is with a heavy heart that I bid my friend goodbye.  But he can go and chase Rascal and Dopey with our other grey, Zeke.  They will like that.

And if you are wondering how the other little dog is doing.................she is grieving.  She has not eaten all day today and is not her perky little self.  But we expected that.  If this continues for too long we will look into getting her another buddy to play with.  But no more greys for us.  They just break your heart too much when they leave you.
at July 29, 2011