Update, Short but with pictures

Once again it has been two weeks since I blogged about my crafts.  I thought once all the holidays were over my life would settle down and I would have more time for my blog.  But it seems that I am more interested in crafting than blogging when I have free time.  But that means I have finished projects to show to all of you today.

Here is the first log cabin square that I completed last Sunday. 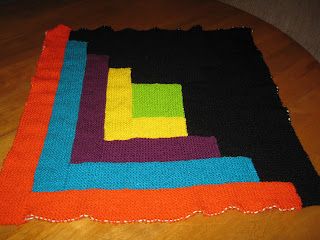 I am loving all the colors in it.  Putting it together will be interesting.  There are live stitches on all four sides and the designer says to crochet the live stitches into each other.  Lucky for me the designer works at my LYS so I think I will calling her and having a private demonstration as to what exactly she means.

I also completed a couple of dishclothes. 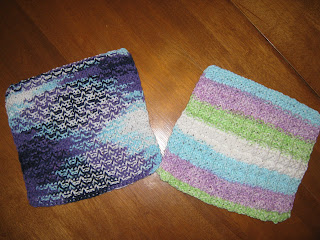 It is a pattern I saw someone in either one of my facebook knitting groups or on one of my ravelry groups.  I can not remember but I do know the pattern can be found here. 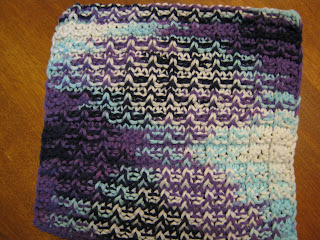 This is a close up of one of the varigated ones. 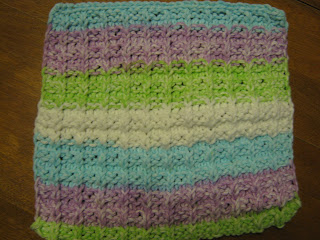 Sorry it is so dark but I took this late in the evening and tried to not use a flash as it washes out the pattern.  But this is LIly and Cream striped yarn.

I am also making a scarf out of this pattern.  Once you have the pattern down you can do it without having to look at it at all.  It took me one dishcloth to memorize it.  (I can be a bit slow at times)

Today is Super Bowl Sunday for us Yanks.  I am planning on taking fibery goodness with me to the party we are attending.  I am going to take fiber for more hats and hopefully I will finish at least one and have another started before the end of the evening.